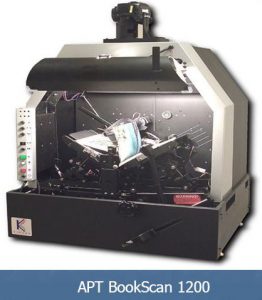 AS KIRTAS celebrates the 15 year anniversary of the first sale of its revolutionary APTBookScan 1200 digitization system, let’s flip through the pages and take a brief glance back at some of the earlier chapters of its memorable history.

The novel concept of a high-volume, automated book scanner that would later become Kirtas’ unique flagship model had its genesis in the late 1990s at the Xerox Venture Laboratory (XVL) and the Palo Alto Research Center (PARC). After a successful proof-of-concept, the project was further incubated and developed under a brand new company founded by core innovators and investors of the Xerox program– Kirtas Technologies, Inc.

In spring 2003, after 2 years of intensive mechanical and software development with several Rochester, NY based companies, a fully-functional pre-production demonstration model was unveiled to the public eye, and by the end of the year the first units were being manufactured and installed at leading internet search engine companies, document management service bureaus and prestigious universities across the U.S.

By 2008, Kirtas had nearly 200 systems installed in 20+ countries around the world, with many notable global institutions and companies actively operating both the APT-1200 and its dual-camera sister model, the APT-2400.

Flip forward to 2018. Several of the original first generation APT-1200 model book scanners, now into their teen years and having digitized literally hundreds of millions of pages, are still in use around the country and abroad. Their continued use, reliability and productivity is a testament not only to the sound concepts, robust patents and solid manufacturing that were incorporated into the original models, but also to the stunning volume of bound material still left in the world to be digitized.

While Kirtas no longer produces the vintage APT-1200 or APT-2400 models, we continue to offer the second generation KABIS line of automated digitization solutions. Over the past 9 years, the KABIS line has added new chapters to Kirtas’ ever-expanding story. It has proven its worth at Universities, service bureaus and libraries worldwide. Whereas the original APT-1200 imaged books from 5” x 8″ to 10 by 13″ at rate of 1200 page per hour utilizing a 12 megapixel digital camera, the KABIS line allows imaging of pages from 4” x 7″ to 11″ x 14″ at a rate of up to 2900 pages per hour, utilizing a 30.1 megapixel camera.

As long as there are bound materials in the world in need of digitization, there is no end in sight to the Kirtas story. While millions of pages have been scanned, millions more still await efficient, high quality digitization, and Kirtas is honored and humbled to be a part of the ongoing narrative.